Originally founded in 1943 as the Association of British Picture Restorers (ABPR), the BAPCR has developed greatly in outlook and number over the last 75 years.

The ABPR was established by a dedicated group of restorers and art connoisseurs including Sir Alec Martin, Colin Agnew and Arthur Tooth, with Sir Kenneth Clark as Patron. Founding members included Norman Hulme, Miss Renee (the Association Secretary), Ralph Warner, Horace Buttery, William Drown and Cyril Cooke. Restorers with at least seven years full-time experience were invited to apply for Full membership subject to an examination of their work and an assessment of their knowledge and professional attitude by members of the Council.

The early aims of the Association were to maintain and improve high standards in training and practice of the profession and foster a high standard of ethical conduct, to advance the education of the public as to the restoration and conservation of paintings and the processes involved, to maintain contacts between members of the Association and other conservation practitioners and organisations in Great Britain and overseas, to safeguard the interests of the profession and to support members.

The first ABPR meetings were held at the Overseas Club, London and the entrance fee for meetings was ten guineas. By late 1945 meetings had moved to 43/44 Albemarle Street, London, the new premises of W. Freeman and Sons, Painting Restorer by appointment to the late Queen Mary and to Queen Elizabeth II. Discussions around that time took place on standardising the system of admitting apprentices as Associate members. The term of the apprenticeship lasted five years, with a further five years as a junior assistant before being tested for full membership of the Association. By the late 1950s, general meetings started to have a subject for discussion as well as Association business. Typical subjects were ‘Varnishes and the resultant bloom’, ‘Panels and transferring’, and ‘Media for restoration’. In 1958 the annual subscription was increased in from six to seven guineas and the first foreign visit to Holland took place.

During the 1960s the Association reflected the growth of the profession and opened its doors to new members. The question of picture liners’ eligibility for membership was first discussed in 1965, but it was not until 1968 that liners were invited to attend meetings and soon after they were admitted as Associate members, becoming eligible for Full membership in 1975. Young people coming into the profession were welcomed in 1966 as Associate membership was extended to full-time students. The ABPR Council was also consulted on the matter of training by the Standing Commission on Museums and Galleries in order to establish a picture restoration course at the Royal College of Art and other training courses at the National Gallery and Tate Galleries

In the early 1970s the number of members from the public sector was growing rapidly and the Association developed to meet the need. In 1972 14 Mason’s Yard, St. James’s became the new address of the ABPR and subscriptions were raised to £10 for Full membership and £5.25 for Associate membership. In 1976 a revision of the Association rules was started and completed the following year. It was during this time that Jan Robinson became secretary, and ABPR accreditation started to become formalised. General meetings were held at the Chelsea Arts Club, and for the first time, a résumé of the talks was circulated afterwards. In 1979 the ABPR held the first meetings for manufacturers and specialist stockists to demonstrate equipment. These meetings were very popular and were repeated several times.

Throughout the 1980s a regular pattern of meetings was established. Each year there were up to five talks or meetings held at various venues including the Chelsea Arts Club and the Polish Hearth Club, as well as visits to continental cities during the Spring, and visits to collections within the UK. Since the 1970s, typed sheets covering particular topics discussed in general meetings were distributed to members but 1988 saw the launch of the little green A5, bound pamphlets covering special talks, general meeting notes and association news – an early indicator of what The Picture Restorer journal was to become. 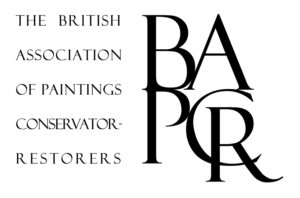 During the 1990s and 2000s the Association began to take the form that we know today. The Picture Restorer journal was launched in 1992 under the editorship of Simon Padfield (1992-2008) and assistant editorship of Jean Hudson (1992-2002) and Jan Robinson (2002-2008), and general meetings were first held at The Art Workers Guild, London from 1994.  2002 was a landmark year for the Association and in a move that reflected the wider aspect of the profession the membership voted to change the Association name to The British Association of Paintings Conservator-Restorers (BAPCR). The period is characterised by several successful large conferences, workshop meetings and overseas visits – features of the Association which continue to the present day.

The Picture Restorer celebrated its 20th Anniversary in 2012 and the BAPCR celebrated 70 years in 2013 with a special conference The Picture So Far… celebrating over half a century of developments in the field of professional painting conservation.