We look forward to welcoming you for an evening talk, via Zoom, by Michael Gallagher, who will present:

“On being social – sharing painting conservation with the public” 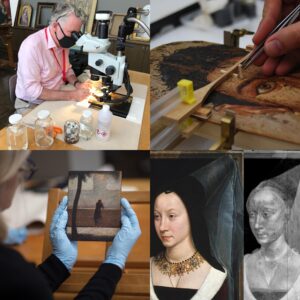 Michael Gallagher, Sherman Fairchild Chairman of Paintings Conservation at the Metropolitan Museum of Art in New York, NY, has been invited to give a talk about the intersection of social media and paintings conservation. He will discuss the philosophy and organisation behind the Met’s popular Instagram page – @metpaintingsconservation – and how treatments and technical investigations are shared in an approachable and understandable way, as well as talk about the difficulties of social media and how they deal with tricky comments. Michael will also touch upon his other experiences with public conservation, including a series of blog posts he wrote in 2014-15 with Keith Christensen on the Charles Le Brun group portrait Everhard Jabach (1618-1695) and His Family, c. 1660, as well as his experience working on Benjamin West’s Alexander III of Scotland Rescued from the Fury of a Stag by the Intrepidity of Colin Fitzgerald (‘The Death of the Stag’), 1786, in view of the public in 2004 at the National Gallery of Scotland.

Michael Gallagher who was born in Liverpool, undertook post-graduate training in the conservation of easel painting at the Hamilton Kerr Institute, University of Cambridge, England. Following a fellowship at the J. Paul Getty Museum, he was appointed Assistant Conservator of Paintings at the Kimbell Art Museum in 1992. As a contractual conservator from 1995 to 1999 for the Gemäldegalerie in Berlin, he conserved six panels from an altarpiece by the Master of the Crispin Legend, wings of an altarpiece by the Master of the Darmstadt Passion, and Saints Gregory, Maurus, Papianus, and Domitilla by Peter Paul Rubens. In May 1999 he was appointed Keeper of Conservation at the National Galleries of Scotland, where he oversaw more than two dozen staff members in the Conservation and Registrars’ Departments and was directly responsible for the conservation of a number of major paintings. These works include: Sandro Botticelli’s The Virgin Adoring the Sleeping Christ Child, Thomas Gainsborough’s William 1st Earl Cathcart, Bartolomé Esteban Murillo’s A Young Man with a Basket of Fruit, Giovanni Domenico Tiepolo’s The Rape of Europa, and Anthony Van Dyck’s St. Sebastian Bound for Martyrdom.

He took up his position at the Metropolitan Museum of Art in October 2005. He initiated and oversaw the major refurbishment of the Sherman Fairchild Painting Conservation Center that was completed in March 2009. In addition to his managerial role, since arriving at the museum he has worked on paintings by Bassano, Cranach, Gerard David, Giaquinto, Giovanni da Milano, La Tour, Le Brun, Pietro Lorenzetti, Moretto, Perino del Vaga, Poussin, Reynolds, Rubens, del Sarto, Subleyras, Titian, Valentin and Velázquez. He has served on numerous cross-departmental committees and in 2015-16 was Chairman of the Forum of Curators, Conservators and Scientists at the museum. He has published articles on specific treatments and broader themes and has lectured regularly throughout his career.

This talk is free of charge for all BAPCR members. A limited number of non-members can book a place at this talk for £5 per guest. Please email BAPCRsecretary@gmail.com for a Zoom invitation and payment details.